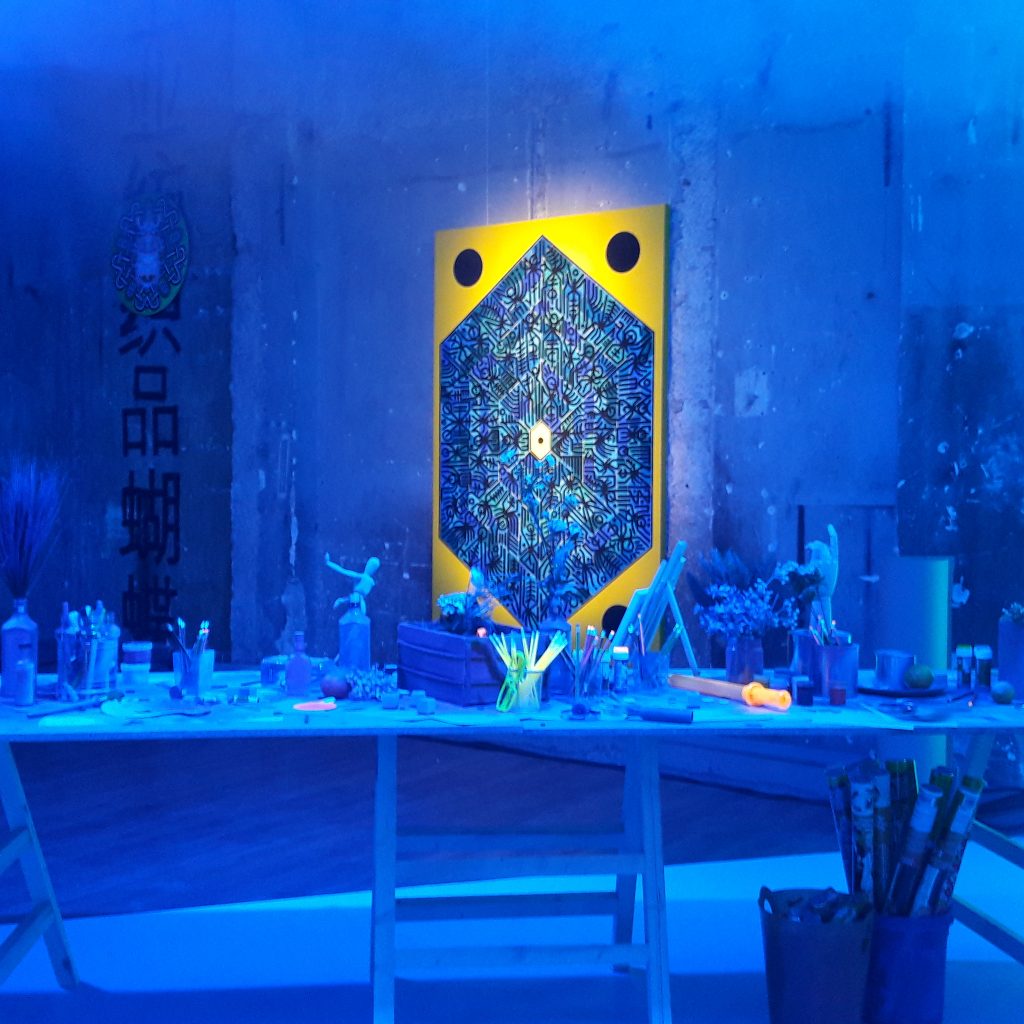 Premium gin brand Bombay Sapphire launched a new global campaign called “Stir Creativity”, which called everyone to engage with their inner artist and unlock their creative potential by interacting with Bombay Sapphire. This included an activation called “Canvas” that encouraged people to customize their gin and tonics with colors and flavors.

And who is canvas’ best ambassador, but artists themselves! So Bombay Sapphire worked with local artists around the world, in order to help people unlock their creativeness in-situ.

In Greece, this exclusive event took place in a former industrial space. For that reason Yatzer chose 3 street artists to amplify both guests’ creativity and event’s urban atmosphere. Each artist had to make a piece of art inspired by Bombay Sapphire and spread inspiration around him.

Spent1 is a graffiti and street artist that brings together geometric patterns, original cartoon-comic characters and special colors. He believes that street art is the the kind of art that truly relies on the interaction with the observer. His artworks are full of playful images that transmit joy and optimism against the lack of smiling. He mainly does murals and has cooperated and worked with world famous brands, business groups, hotel groups, cultural organizations, various artists, musicians, etc.

For Bombay’s Special Event Spent1 painted his own version of Queen Victoria (2x3m canvas painting), that appears on Bombay Sapphire’s label. This monochrome and multi-toned imperial figure became the night’s most imposing presence.

Lune82 is a graffiti writer and street artist. His style has been influenced by European and NYC old school style. It also reflects painting movements such as abstract expressionism and constructivism and graphic design. His work is mainly inspired by space and nature and his main interest is to spread the collective idea and sense of freedom and revolution of graffiti art, to the whole world. He is interested in many techniques, experimental hand writings, mixed art forms and new ideas and he is always ready for a new challenge.

To the Bombay Sapphire challenge, Lune82, responded with a 3x2m “Dream Rider” expansive canvas painting, showcasing his retro-futuristic style-writing. With this piece of art Lune82 tried to achieve the famous (in graffiti writers language) “getting up”. A motive for all guests to express themselves and their personal style, right at that moment of time. A motive for all guests to ride their creative dreams!

Dimitris Dokos is a former graffiti artist and a self-taught street artist. Most of his paintings (his trademark scarabs) are based on irregular forms, combining patterns, geometrical forms, symbols, illusions and colors. He sees graffiti as a mean of creativity and expression. His work is inspired by the shamanic myths that relate the creation of the world to scarabs, as well as the way they were perceived in ancient Egypt: symbols of the creative power of the sun and the rebirth in the afterlife. On his most recent work Dimitris Dokos sets aside his well-known insect and focuses on his own hieroglyphic language. The amazing thing about Dimitris Dokos hieroglyphics is that he doesn’t use the technique of repetition. All the symbols he uses are sui generis and you cannot find them twice in a piece of art.

For Bombay Sapphire Dimitris Dokos created a large scale canvas of hieroglyphics, painted on a bright yellow background. This amazing canvas was painted above a tape construction that formed Bombay’s hexagonal pattern. The tape was removed through the night making the night’s most surprising apocalypse!

During the night anyone who felt inspired by the artists and the art around them, could easily get creative, since there were art supplies spread all around. Sprays, watercolors, markers, pencils and oil colors got grown-ups loosen up and play as children. Let’s hope that this was just a creative beginning and that the inspiration of the night didn’t wear out along with the night’s last gin!